Electric vehicles are not only known for how economical they are to run but also for the lack of sounds and noises they make. Do electric cars such as Tesla even produce any sounds?

If you want to get to know your new Tesla, there’s no better starting point than getting familiar with all of the sounds and noises it produces. This article will try to list and explain all of the tones, melodies, and noises that occur commonly in and around Tesla models.

It is a common misconception that electric vehicles are silent. This belief stems from back when the first Toyota hybrids hit the US market. These vehicles made no noise when their electric engine was powering the car. However, things have changed since.

Teslas can make fake engine noise. While there’s no engine to produce sounds, recent traffic regulation changes in the US have ensured that every electric car sold in the US has a built-in speaker that creates fake engine noises. This way, pedestrians can hear the car coming.

Like any other fully electric car on the market, Tesla has no engine that can produce sounds. Being silent was once the main selling point for electric cars; What’s better than cruising in complete silence.

If you’d like to find out why Teslas tend to make a certain noise when charging, check out this related article that I wrote. Batteries are weird sometimes!

The same rules that electric vehicle manufacturers need to follow in the US also apply to the EU.

The changes for both the US and the EU market are the main reason why every Tesla sold since the final quarter of 2019 is equipped with a speaker that emits engine noise in low-speed traffic situations.

Are Teslas Loud Inside?

Before taking a better look at the external Tesla sounds, we need to discuss the interior noise levels of this luxury electric car brand.

Find out more about Tesla road noise in the table below:

To determine whether Teslas are loud inside, we’d need to compare them to some of its main rivals. Here’s a brief table of Tesla’s electric vehicle competitors and their cabin noise at 60 miles (96.56 km) per hour:

Now, let’s take a look at how much road noise the old-fashioned petrol and diesel-powered cars make:

After looking at the data from these three tables, we can finally answer the question at hand:

Most Tesla models show exceptional road noise soundproofing capabilities. At 60 mph (100 kph), a Tesla Model S is up to 10% quieter than a standard 2018 Toyota Corolla. Tesla Model 3 and the Model Y are slightly noisier at highway speeds but still on par with the competition.

Thus, according to data and evidence, Tesla’s noise-canceling features work really well. This feature is more evident in its more expensive models. The Model S and the Model X show exceptional outside noise reduction capabilities that many of their rivals can envy.

However, the more affordable Model 3 and Model Y can’t share this bragging right with their pricier relatives. While not uncomfortable, road noise at highway speeds can be an issue for these Tesla models. 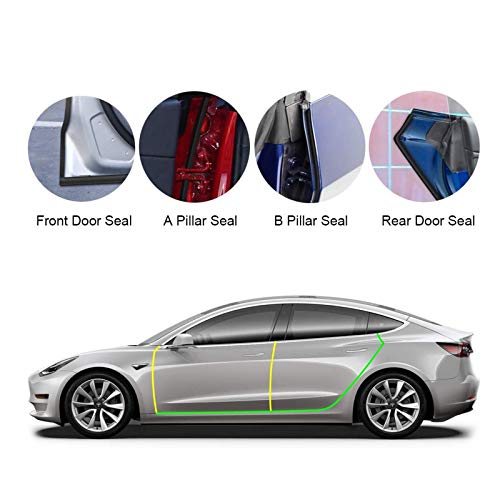 If something doesn’t seem clear, you can always rely on YouTube for help:

What Are Tesla Driving Sounds?

Tire and road noise is not the only thing you’ll hear in a Tesla. Every Tesla produced since September 2019 has a built-in speaker that emits false engine sounds. The speakers have one main function:

The false engine sounds played through the speaker located outside the cabin are also played through your Tesla’s internal audio system. This shouldn’t worry the drivers, as the levels are adjustable both automatically (when you play music, etc.) and manually.

While some Tesla drivers might find that this newly required feature ruins the entire EV experience, others have found ways to have fun with it. Let’s take a look at some of these sound-related Tesla quirks:

Here is a brief list of some things that the Tesla Boombox can do:

As evident from this brief list, Tesla tried to add playful elements to an update that was meant as a serious safety measure. The best part is – it actually worked!!

This feature does not only help reduce the risk of accidents involving visually impaired and unsuspecting pedestrians, but it can also reduce road rage incidents.

Realizing that they can alter their Tesla sound as they wish, more creative drivers have taken their chance and started creating a unique sound profiles for their cars. Who can get mad at a person whose horn is La Cucaracha?

I explored if Electric Cars Make Noise. Do they contritbute to noise pollution? Find out in this somewhat related article that I wrote. Come on, check it out! 🙂

The Tesla Boombox allows for numerous options when it comes to engine and horn sounds. You can make your electric Tesla sound like a V8 monster or an old tractor in a few simple steps (more on that later). The same applies to horn sounds.

Tesla owners can choose from hundreds of sounds available online, or they can even record their own. Here is the list of some of the best and most popular Tesla Boombox Sounds that you can download and use today:

All of the Tesla sounds are just simple .mp3 files. This means that you can easily make your own sound and customize the Tesla Boombox experience even further. Read on to find out how you can do this.

How To Change Tesla Boombox Sounds

The Boombox feature is definitely an interesting way to implement a fun solution to a problem as serious as pedestrian safety. Even though it shouldn’t be hard to find, locating this Tesla feature is a mystery to some owners.

Let’s find out where the Boombox option is tucked away in your Tesla’s options and how you can adjust each of the previously mentioned features it has to offer:

Here’s how you can make your Tesla unique by changing the car’s horn sound in just a few simple steps:

Unless you enable the Replace Horn option, the sound will be played through the car’s external speaker only when you use the option from the screen. On the other hand, marking the option enables you to play the selected sound every time you press the horn.

You can also set the sound level of your horn under this menu. This is an especially handy feature when you’re sitting in your garage and testing out all of the sounds offered.

If you want to make your Tesla sound more interesting when driving it around town or idling at a red light, here’s how you can personalize the driving sound:

Stock options for the driving sound include Sneak Jazz, Elevator Music, Ice Cream Truck, and various engine sounds. This function will automatically switch off on most Tesla models once your car exceeds 12 mph (19 kph).

Tesla used to have 3 settings for the Radio or Music interface (Full-Screen, Medium Screen, and Small). The Medium interface would let you have access to your Recents and Favorites. After an update, many people thought that the size functionality has disappeared. But there is a List Icon on the right-hand side of the Music Entertainment System Bar, and when clicking on it the Medium Sized Interface will appear again along with your Favorite and Recent music.

Check out all my Tesla Pro Tips

Just like your Tesla’s horn and driving sounds, you can also customize the sound your electric car will play when you use the summon feature. Here’s how you can activate and change your Tesla summoning sound:

Once again, you have plenty of pre-loaded options at your disposal. Tunes such as Gallop, Coconuts, and others are available to choose from.

For those Tesla users who refuse to give up on the child inside, the same update that brought Tesla Boombox also offers a farting option.

Tesla already has the classic prank of reproducing farting noises when someone takes a seat in the car. Now it can play this sound on its external speaker.

Here’s how you can make your Tesla fart:

You can also set up your Tesla to fart on demand by checking the first option available under the list of farts. This way, every time you press the left scroll wheel, the car will enable the Emissions Testing Mode, more commonly known as farting.

Another option available under the Emissions menu is to enable the Tesla to fart every time you use a turn signal.

Adding Custom Sounds to Your Tesla

In case Tesla doesn’t offer any sounds compatible with your taste, you can always add your own songs, sounds, and noises to the car. Here’s a simple guide on how to add a new sound to the Boombox:

You can add custom engine, horn, and summon sounds this way in a matter of minutes.

One important thing to keep in mind is that all of the .mp3 file names can’t have spaces in them. Enjoy your new favorite Boombox sounds!

We can’t say that we know our cars without knowing each potential sound they can make. This is easier said than done with modern electric cars such as Tesla.

If this article wasn’t enough, you can discover and get familiar with all of the sounds that a Tesla can make by watching this YouTube video:

How To Upgrade Tesla Model 3 Audio | Should You Do It?

Can Electric Cars Make Noise? From The Inside and Outside

Can a Porsche Taycan’s Battery Be Upgraded?