Teslas are quickly becoming the top brand of electric cars, but many people have questions about how easy they are to work on. For example, do you need special equipment to jack up a Tesla? How exactly do you go about jacking up a Tesla?

To jack up a Tesla, you should use jack pads to ensure that you don’t damage the side skirt of the car, or more crucially, the expensive battery. As long as you use the designated jack points—and, for Models S and X, Jack Mode—jacking a Tesla isn’t different from jacking another car.

In this article, I’ll be covering everything you need to know about jacking up your Tesla, whether it’s a Model X, Y, 3, or S, as well as relevant info about what you need to jack up a Tesla.

Best Floor Jack for Your Tesla – How Do I Choose a Floor Jack?

Choosing a good jack is essential for any car, but you especially need to scrutinize jacks when you have a Tesla.

Generally, you can use a regular jack, but the use of jack pads is highly recommended. Using jack pads along with proper jack points helps to guarantee that you don’t damage the very expensive battery right next to the jack points. In other words, it’s not really about the jack so much that you use jack pads with your jack.

Jack pads are first placed into the designated jack points on the Tesla – every model has them, so check your owner’s manual if you’re unsure where they’re located. The jack pad acts as a flat surface that the jack presses into to lift the car up without making contact with the car itself.

Jack pads are especially handy in preventing you from accidentally jacking somewhere that isn’t an official jack point. While the battery is the main concern, you may also accidentally jack the side rails of the car, which causes body damage that, while less expensive than a new battery, still isn’t cheap.

Which Brand of Floor Jack Is the Best for Every Tesla?

There are several brands of jacks to choose from, all of which will do a great job of jacking up any Tesla. Each one offers unique benefits that you’ll need to consider when making a decision.

The Bendpak BL-5000SLX QuickJack from Amazon.com is a full portable lifting system. It handles every part of lifting your car, and there are no annoying crossbeams to get in your way when you’re working. Instead of crossbeams, there are automatic locking beams that act as jack stands and lock the mechanism in place. 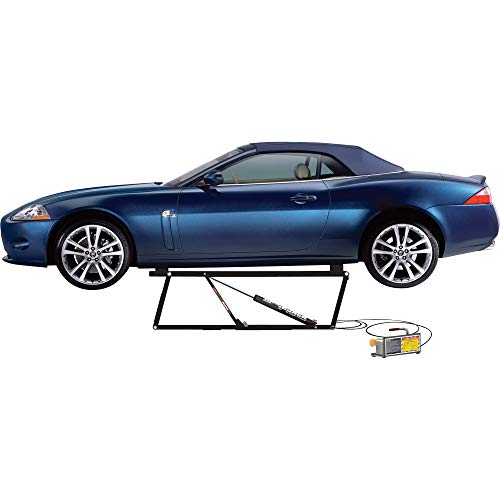 The difference between QuickJack and manual jacks is safety: all you do is fit jack pads over your Tesla’s jack points, place the two units on each side, and park your car over them. If you’re in the right place, all you do is press a button, and the QuickJack handles the rest.

You can get about two feet of clearance out of this system, which may be overkill considering that you don’t need to work underneath a Tesla too much—the most you’ll probably do is change out the tires.

This jack is a high-tier option for owners that regularly change out their tires and is great for people who take their Tesla out onto the track frequently. For people who only need to change their tires every once in a while, though, this may be a bit more expensive than you need.

These fashionable red jack stands are specifically made for Teslas and are accompanied by Tesla-specific jack pads to ensure your battery or car body doesn’t sustain damage.

These jacks can handle 3 tons, making them perfect for basic maintenance like changing and rotating tires, as well as cleaning and other miscellaneous tasks.

This is a very compact and user-friendly jack stand specially designed for Teslas. Simply fit the jack pads in your Tesla’s factory jack points, fit the jack in place, and jack it up. There’s nothing fancy here, but that’s perfectly fine for most needs. You can order one at Teslarati.

It’s worth noting that these are sold in units, meaning you’d need two of them to jack the whole car up. Fortunately, though, for most situations, you don’t really need to jack both sides up at the same time.

Where Do You Jack Up a Tesla?

Before trying to jack up any Tesla, you need to know that it’s not like jacking up a gasoline-powered vehicle.

A large section of a Tesla’s underside is occupied by its powerful high-voltage battery. If you try to jack the car in the wrong spot, you can cause a lot of cosmetic damage, not to mention potentially ruining the battery. That’s why every Tesla has certain jack points where you’re supposed to place your jack.

Where Do You Jack Up a Model S ?

The Tesla Model S has three rectangular jack points located on the underside of the car around the edges.

Feel around under the edge of your car, and you can feel them bolted into the chassis. The jack points are relatively easy to find on this model and aren’t inwardly placed.

Where Do You Jack Up a Model X ?

Where Do You Jack Up a Model Y ?

The Model Y jack points vary from the Model X and S. First off, there are four of them behind each wheel. Second, instead of being bolted into the chassis, these jack points are stamped.

Rather than being on the outer edge, you have to go more inward on the body of the car to find them. Another departure is their circular shape, which you’ll need to consider when purchasing jack pads.

Where Do You Jack Up a Model 3?

Model 3 shares the four circular jack points of the Model Y, located behind each wheel on the body of the chassis. The shape of the jack point, as I mentioned before, needs to be considered when you’re choosing the right jack pads for your car.

How Do You Use a Floor Jack on a Tesla?

While some aspects of jacking different Teslas vary, you’ll find that they’re not terribly different. For the sake of education, however, I’ll be going over how to jack each Tesla model.

It’s important to note that if your Model S or X is equipped with Smart Air Suspension, the car self-levels. Remember that Jack Mode must be enabled to jack the car up, or else anyone that places any body part underneath the car could face grave injury.

The Model 3 and Y have similar jack points, and you can see a visual guide of how to jack the Model 3 here, on Youtube:

How To Jack a Tesla

How Big of a Floor Jack Should I Buy for My Tesla?

The size of the jack you need is largely dependent on how much clearance you want. If you’re more comfortable with more clearance, get a taller jack stand. As long as the jack is compatible with jack pads and everything is snug in the assigned jack points, the height is up to you.

While the QuickJack described above gets you a respectable two feet, the Teslarati jack has a maximum height of 16.5 inches (41.9 cm).

How much room do you need, though? Not much, to be honest. Other than the wheels/tires, there’s not much underneath the car you need to get at. Most of a Tesla’s underside is the battery, which ordinary folks like me and you don’t really need to mess with.

What Does Jack Mode Do?

Jack Mode prevents the car from automatically adjusting its suspension. This is most ideal for jacking the car up, as the name suggests. However, Jack Mode may be useful in any situation where you don’t want your Model S or X arbitrarily changing its height.

In general, you want to turn off Jack Mode whenever the car isn’t actually jacked up because the smart suspension adjusts for things like potholes and unevenly paved roads. Leaving Jack Mode on could cause you some difficulty getting out of uneven parking situations, too.

Teslas appear at first glance very different from other cars, but when it comes to jacking them up, they’re not terribly different from gas-powered cars. As long as you use the appropriate jack points with jack pads and enable Jack Mode when necessary, it’s a breeze.

How To Fix “Tesla Not Updating” Issue with 4 Solutions