The Supercharger was Tesla’s knockout punch, thanks to the rapid charging stations that juice up an electric car within minutes. But is that all there is to know?

Tesla introduced Superchargers in 2012, expanding the project as more users switched to electric power. At 250 kW, the Supercharger gives users a range of up to 75 miles (120km) in five minutes. When that moves to 300 kW, users will gain almost 100 miles (160km) of range in the same amount of time.

The Supercharger is a fascinating technological development that has revolutionized Tesla’s practicality. This piece will answer some frequently asked questions about the Tesla Supercharger to improve your understanding of this simple yet effective tool.

What Are Tesla Superchargers?

Currently, Tesla runs more than 25,000 Supercharger stations globally. In the table below, you’ll see how the different models compare in terms of power output:

As of writing this, there are still V1 and V2 stations still out there, but Tesla plans to upgrade all charging stations to V3 very soon. Thankfully, Tesla’s Supercharger map informs you of the speeds available at different stations.

Unfortunately, some older model Teslas are incompatible with the V3’s CCS plug. However, worry not, as Tesla will (for a fee) update your car’s software and hardware to fit with a V3 Supercharger.

Using a Tesla Supercharger is relatively easy. Just park next to the charger, plug the cable in and wait a couple of seconds for the car to start charging. The car’s onboard computer will inform you how fast your car’s charging and how long it will take for it to fill up.

Enjoy a drink or a light meal as you wait for your car to charge while keeping track of the progress via Tesla’s phone application.

This YouTube video will show you how insanely fast a Tesla V3 Supercharger fills up a Tesla battery:

Tesla Supercharger miles expire after six months, and if you fail to use them, Tesla takes them away. Then, you’ll resume paying for the supercharge service. Tesla deducts 2.5 miles (4 km) for every kWh you get. Therefore, 1000 Supercharger miles (1,609 km) are worth 400 kWh of Supercharger energy.

Do Tesla Superchargers Have a Time Limit?

A typical stop at a supercharging station will take longer than it would take you to fill a tank of gas. However, waiting a few extra minutes for the Tesla batteries to fill up won’t mess up your travel plans.

Tesla Superchargers do not have a time limit. The time it takes to fill the battery or fill to a certain point depends on the Supercharger’s output and the charge remaining in the batteries.

Note: Tesla charges a fee for failing to move your car after the batteries fill. The idle fee starts accumulating when supercharging ends and the charging station is at 50% capacity or more.

The idle fee per minute doubles if the charging station is at 100% capacity.

The Tesla application is your best friend if you leave the charging station with your Tesla plugged in. It will alert you when the battery fills, saving you the cost of paying the idle charge.

Tesla hasn’t set an upper limit for the idle charge. So, the longer your car remains plugged in, the deeper you’ll have to sink into your pocket.

How Long Does Free Supercharging Last?

Free supercharging lasts for the duration provided by Tesla. The best you can get is free unlimited supercharging, but the terms vary depending on the vehicle. It’s available on some Model S and Model X vehicles and some Model 3 performance vehicles.

The Model Y didn’t get the free supercharging treatment from Tesla.

To find out whether your Tesla qualifies for free supercharging, contact Tesla.

Is Supercharging Bad for Tesla Batteries?

Lithium-ion batteries do not enjoy rapid charging as the heat it produces degrades the system. Naturally, therefore, you’d expect supercharging to be bad for Tesla Batteries. But, luckily, that’s not the case.

Supercharging is not bad for Tesla batteries, thanks to an algorithm created by Tesla. With their technology, using a Supercharger doesn’t increase the wear rate of your battery. However, the algorithm only works if you use a Tesla Supercharger.

Using another Supercharger increases the chance of damaging the car’s battery faster than usual.

If Tesla detects the overuse of a non-Tesla Supercharger, it can limit the charging rate of a particular vehicle. It does this to ensure the longevity of its vehicles.

If you’re in your car, looking at the map and touching one of the red supercharger icons, it will provide you with an additional menu telling you about the supercharger and how many stalls are available etc. You will also see some greyed out icons there like Wi-Fi, Shopping and Coffee etc. If you touch one of those greyed out icons, it will bring up the related information regarding that supercharger. For example, if you click on the coffee icon, it will show you all the coffee shops in that area around the supercharger.

Why Does Tesla Supercharging Slow Down?

Tesla batteries rarely charge consistently when using a Supercharger. Instead, the charging rate fluctuates depending on factors such as temperature and battery charge level.

On a similar note, I wrote a related article that might interest you called: “Why Your Tesla Is Charging Slow“. I also shared some tips on how to resolve every issue mentioned.

How Are Tesla Superchargers Powered?

Part of the allure of electric vehicles is that they are much friendlier to the environment than their internal combustion alternatives. However, the production of electricity leaves a considerable carbon footprint.

Tesla Superchargers are powered by local utilities. Some supercharging stations utilize solar energy, but Tesla primarily uses locally sourced electricity. However, they plan to adopt renewable energy for all their charging stations by the end of 2021.

The company is unlikely to reach that goal, but with time, Tesla will achieve its renewable energy goal.

You can download third-party apps that inform you how clean the electricity charging your Tesla is.

As an added bonus to this article, I’ve created this easy-to-use charging calculator. Simply input your model, charging wattage, and charging percentage, and you will get the estimated time it will take to charge a Tesla in terms of hours. You can play around with numbers a bit just to see how charging time changes:

Superchargers changed the game for Tesla owners. Instead of being glued to a charging station for hours or worrying about running out of juice in the middle of the highway, users can boost their car for another 75 miles (120km) in just five minutes.

For people using their Teslas for daily commutes, that’s more than enough to get home in time for dinner. 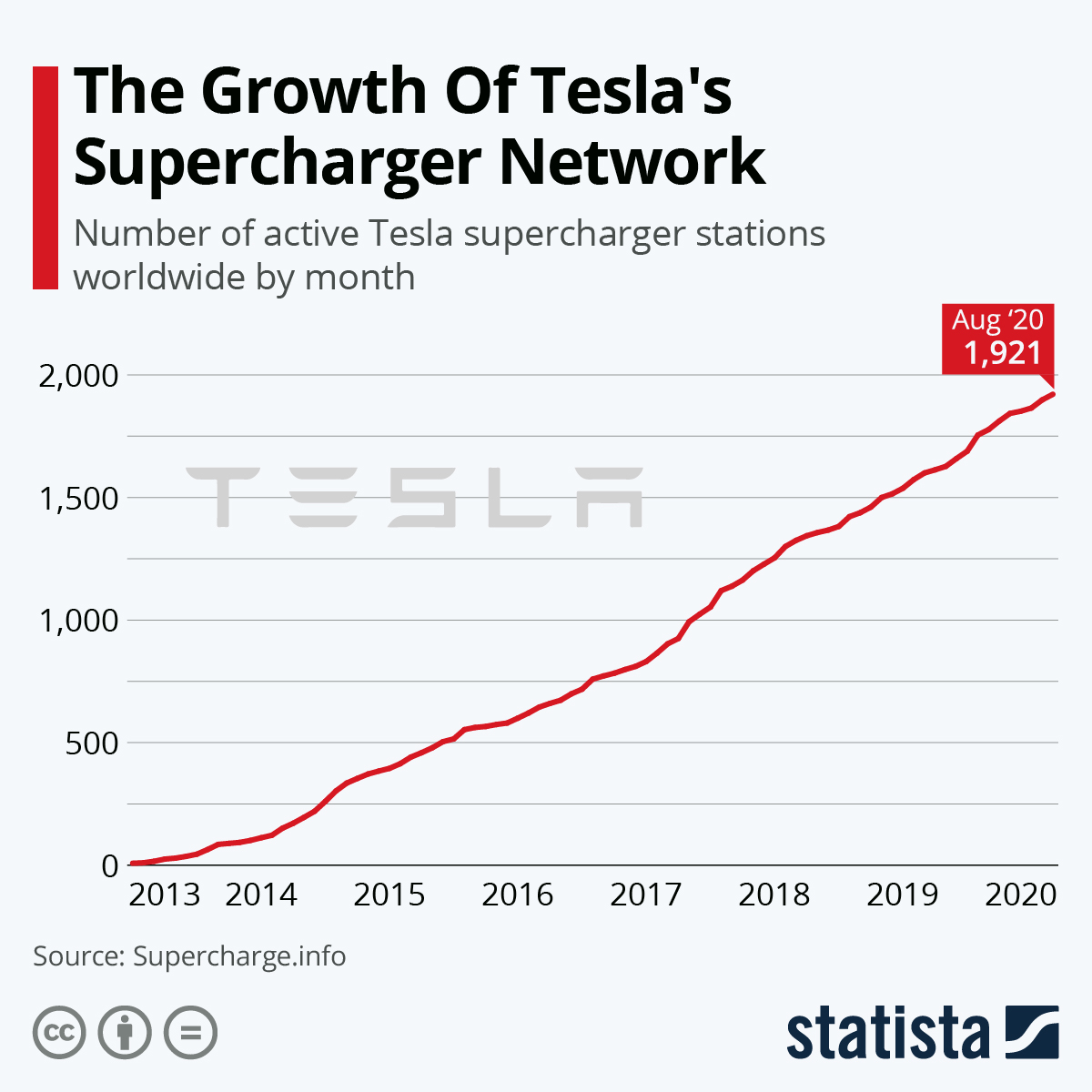 You will find more infographics at Statista

Thanks for visiting evspeedy.com. I'm passionate about Tesla and Electric Vehicles. I was a TSLA shareholder before the hype and still am. I also believe in Tesla’s speedy mission to accelerate the world to a sustainable future.

Thanks for visiting evspeedy.com. I'm passionate about Tesla and Electric Vehicles. I was a TSLA shareholder before the hype and still am. I also believe in Tesla’s speedy mission to accelerate the world to a sustainable future.

Do I Need Permit for a Tesla Charger? Consider These Factors

How Much Does A Tesla Battery Weigh? Pack and Wh/kg